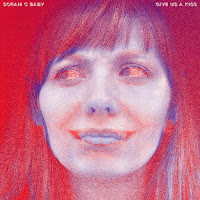 It has been quiet around Scram C. Baby. I may have seen the band for the first time in the 90s even, supporting Johan or Bettie Serveert in Leiden and again in the 00s. And here the band is back after eight years in hibernation. And how!

On Give Us A Kiss Scram C Baby plays a rather interesting form of alternative rock with hints at punk and new wave woven into its music. That mix of disinterest and aloofness The Cure could excel in while having so many sparks fly off of its music that listening becomes a extremely pleasant mixed experience.

This album certainly dwells on the dark side of the street but not without forays of staring into the sun at the right times of the day. “Shine a little light on my darkness, babe” isn’t a lyric just falling out of the sky. It could be the motto of Give Us A Kiss. The sound in general is dark, at times even as if coming from under a cushion, but it fits. The result is that not many instruments really escape the whole, remain a part of it. They distinguish themselves only in a glum sort of way.

The good part is that this doesn’t take anything away from the songs. Several are even quite danceable in an alternative way. In the 80s this certainly good have worked in between the disco where bands like Talking Heads, The Cure and Simple Minds kept the crowd on its dancing feet just as easily as Chic or Sylvester did. Songs like ‘Tree House’ and ‘Kill Screen’ are alternative dance rockers if I ever heard some. Scram C Baby is very much alive in these songs.

Another pearl on this album is ‘Elephant’. Aloof, detached, all words befitting the song. Yet there isn’t single note in the song not in its right place. The song calls for slow moving, but non-stop at that. The song has this joyful undercurrent tugging at my limbs the whole time. Synths move in and out of the whole, while the drummer keeps up a slacker Madchester rhythm. Slow is the word yet in the most positive form possible.

Digging into the album, I come to a bit surprising conclusion. Where nothing I heard from Scram C. Baby before enticed me to listen to one of its albums, this new one holds songs with a capitol S. The band mixes urgency with detachment and a day at the beach with a nuclear sundown. Most songs may be alternative rockers, they are very much to the point. The way they are mixed put them straight in my face. Singer Jan Cees Smit is singing right in front of me, spit and all, no escape possible. The band keeps its pace where the rhythm tandem Geert de Groot and Marit de Loos do not let go for one second. Over this firm basis the guitar and keyboards can frolic, whether solid, extremely tight or adventurous. The result is a bunch of songs that beg to be heard. Who was it who wrote recently that all musicians are washed up after their 30th birthday? Take a listen here, mate! Eight years is a long time for a new album. It seems like the right choice was made here.

★★★★ in Lust For Life Magazine

Give Us A Kiss is via deze link te beluisteren: